With apologies to Warren Ellis

I’m not normally one to talk about my own problems. I know so many people going through so many things right now that make my issues seem like choosing which shoes to wear one day.

Because of scheduling and kids and work and all the things, I tend to do grocery shopping in spurts. It’s not the most efficient but that’s how it is.

I’ve been pretty stressed for a few days/weeks/months/all-the-time-ranges now.

I haven’t been able to pinpoint the exact “reason” but I had been chalking it up to standard work-related stress. Startup. Busy. Short-staffed. Lots of things on the plate. Those kinds of things.

My amazingly wonderful wife, suggested that when I got done working tonight that I take a little time to just do “whatever” (her suggestions - play minecraft/hearthstone, read, that kind of thing). I knew we needed to get some lunch supplies so I figured the grocery store would be a good use of my time.

Mind you, grocery shopping is sort of auto-pilot at this point especially when it’s one of the “we ran out of milk and cream and bread” kind of trips. It affords me a bit of time to just think. While I was walking around the grocery store tonight, I think I was finally able to target WHY I’ve been so stressed lately. 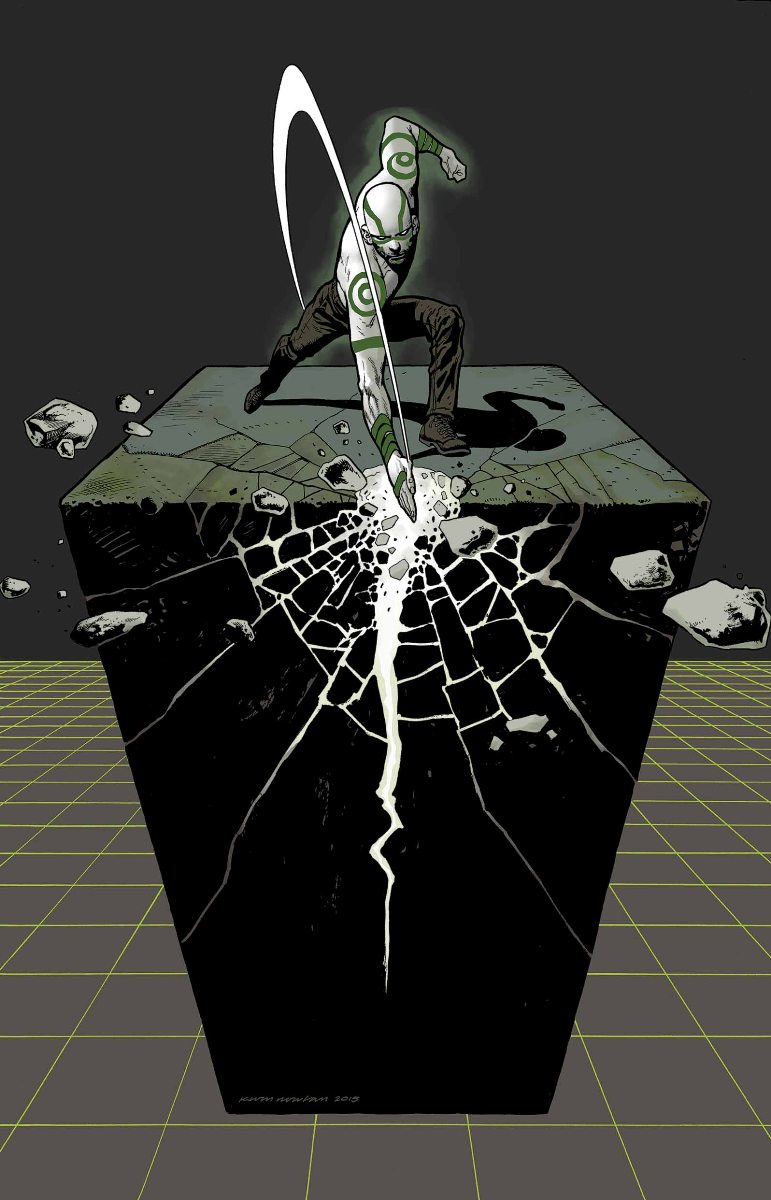 If you’re not a fan of the Marvel “Inhuman” characters, Carnac is probably just that character Johnny Carson used to play on The Tonight Show. I’m talking, however, about Karnak Mander-Azur who is a member of the “Inhuman Royal Family” in the Marvel Universe:

Side note: If you’re not familiar with the Inhumans in the comics, it’s REALLY good reading for understanding what’s going on in the Marvel Cinematic Universe on Agents of S.H.I.E.L.D., terrigen and all that jazz

In the comics, Inhumans are people with special strands of DNA that are susceptible to something called Terrigen Mist. That’s a slight butchering of it. The general idea though is that when an Inhuman undergoes “terrigenisis” they develop abilities.

The interesting thing about Karnak is that he’s never actually undergone this transformation. He does however have an ability. Karnak is able to find the weakness in ANYTHING: 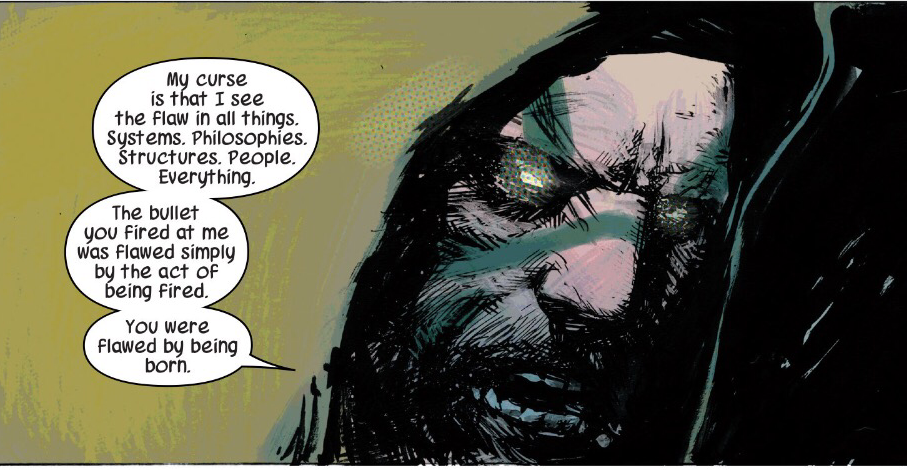 Before the recent solo series about him, Karnak committed suicide after coming to the conclusion that HE was the flaw in everything: 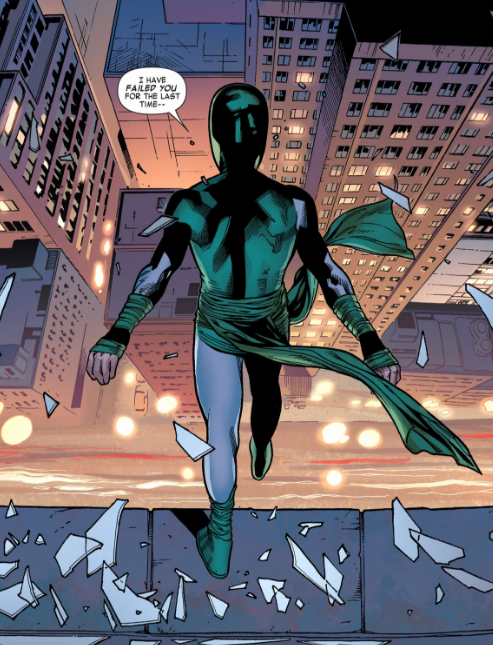 Mind you this is comic books and characters don’t always stay dead. So now Karnak has his own series and it’s pretty awesome (if not somewhat depressing at times). 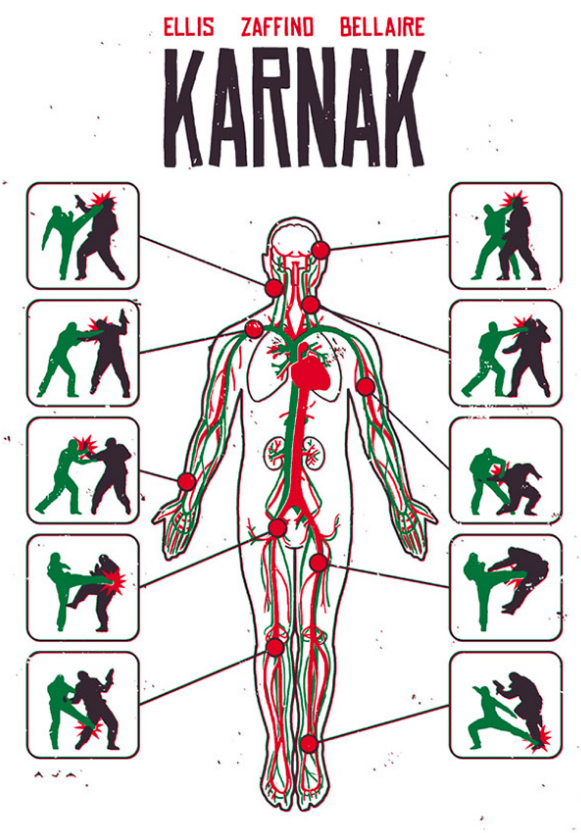 So why am I telling you this?

The flaw in all things

Recently at DevOpsDays Atlanta, John Willis gave a presentation on burnout. This has been a passion of his for the last few years and it’s been invaluable to our community.

I never really considered myself “burned out” and suicide is the farthest thing from my mind.

The mind is an amazing thing though. Through a combination of John’s presentation and a new Karnak issue coming out recently, I guess my subconscious managed to make a connection somewhere.

In some of my posts about PaaS, I’ve made comments about failure points in systems. As I noted in the most recent post on the topic, Tim Freeman, summed it up perfectly:

This is the “curse” of the experienced operations person. We see the flaw in all things.

I’ve had trouble with a few projects at work. The ONLY thing I can see are the breaking points. The risks. The things that will page me at night.

I can’t finish a project because I keep finding things that could cause problems. I even mentioned this to our CTO and CEO at one point when we were trying to size some private deploys of our stack.

I couldn’t see anything but the largest configuration because all I could see was places where there was a risk. There were corners I wasn’t willing to cut (not bad corners like risking availability but more like “use a smaller instance here”) because I could see and feel and taste the pain that would come from having to grow the environment under duress.

I’m frustrated with putting everything in Docker containers because all I see is having to take down EVERYTHING running on one node because there’s may be a critical Docker upgrade. I see Elasticsearch rebalancing because of it. I see Kafka elections. Mind you the system is designed for this to happen but why add something that makes it a regular occurance?

I’m frozen. I can’t do anything. I don’t know WHAT to do.

I’m someone who takes a lot of pride in his work. I build reliable systems and I’m pretty fucking good at it. When I can’t see a path to building a reliable system, I see how Karnak felt and I want to throw myself out the metaphorical window.

I become disillusioned with my job because I’m not actually able to accomplish anything and that sense of accomplishment is what keeps me DOING my job.

You take that away and what’s the use?

So this is where I ask for help. I can’t be the only person who fights with this or who has gone through this. What do you do? How do you do something that you KNOW will bite you in the ass 6 months down the road? How do you allow yourself to take on that temporary tech debt knowing good and damn well that you can’t afford to take it?